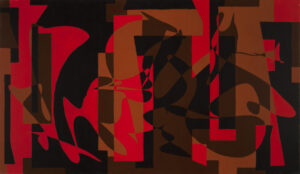 This work may seem rather unusual for me, but it is actually emblematic of several works I have been doing on paper recently, but have not been publicizing.  Those began out of a desire to work with a more traditional method of moving paint with brushes, as opposed to my usual process of allowing paint to drift on its own.  That usual method is very time consuming and even tedious, hence my desire to work with a method that was more immediate.  I also wanted to exercise my compositional abilities in quicker works that wouldn't further clutter my storage room, which is already about filled to capacity.

In terms of subject matter, I had created several examples of artist imitation based lesson plans, and had enjoyed painting my own version of Motherwells and Bacons.  As in my usual work, I was drawn to some of the geometric elements dealing with space.  Particularly, I wanted to create a sense that there is no "background" (a word I hate).  So the early sketches began as largely geometric forms, but I later incorporated spontaneous organic qualities as you see here.  In many cases the geometric forms overlap others while simultaneously being overlapped themselves.  The organic shapes alternate the color of the geometric elements, but appear as transparencies that make it ambiguous as to which one is "on top" of the other.  They also do not introduce new or anomalous colors, keeping them integrated rather than separated from the surrounding areas.

Since I painted this, I have also started using the same brush to paint the various shapes, thereby mixing the different paints and adding an even more integrated quality to the variety of shapes.  These aren't as hard-edge as they appear, because I am not interested in creating something that is purely mechanical.  The human elements, including human imperfection, will always be central in my art.

So this does not represent a complete change in direction for my art, and I have created several recent works with my usual methods that I will post later.  But it is a welcome diversion, a remedy for some of the things that have aggravated me lately, and these have informed my other paintings to a certain degree in terms of their ambiguity of space.  As the title suggests, however, I do plan on doing more like this.