My work explores the metaphysical or emotional realm through a painting process that employs physical forces. I depict emotional energies such as grief, despair, isolation, and anxiety by utilizing physical energies such as gravity, water erosion, and sedimentation. In the past I have used gravity itself as a medium to develop imagery that is dictated by natural law. Water erosion and sedimentation determined parts of the visual outcome, as pigments were swept away from certain areas, and deposited in others where water would accumulate and evaporate. I used the visual forms that developed to depict emotional forces and energies that are unseen but very real powers in the world. More recently, I have increasingly chosen to work on a flat surface that negates gravity's pull. So rather than forms energetically flowing on a tilted surface, they are more likely to drift aimlessly in emptiness. My creative process acts as a metaphor for the themes of powerlessness that inspire my work. Moreover, by incorporating natural forces into my painting process, I am simultaneously exalting natural order while decrying the iniquities created by human order.

One of the most important functions art can serve is to provide us with what our lives are missing; whether that is something physical or something less tangible like our hopes and ideals, or a sense of belonging. In the days of quarantine, perhaps we are all more acutely aware of such deficits. My recent works increasingly mourn what we are losing or what has already been lost. As hope dwindles, I have progressively replaced the iconic compositions and dynamic organic shapes that used to dominate my work with more asymmetrical and frontal geometric elements. I'm not interested in intellectual, precise, mechanical geometry, however, as that would be emotionally cold. The shapes are blurred and imprecise to emphasize the natural, human element, as well as the perhaps futile resistance to disintegration. Many of my current works feature dark voids in juxtaposition with lighter values, conveying not only a distinction between these opposing values, but also a sense of interlocked inseparability. They are often stark and bleak, with compositions that simultaneously suggest both that the dark is overlapping the light, as well as the light overlapping the dark. This ambiguity is meant both to confound as well as to engage the viewer, swallowing them into my world. 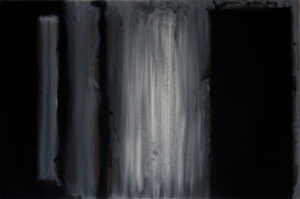